June 08, 2021
The 25th session was played on June 7, 2021 (Kythorn 7, 1493 DR).  There were three characters present: Lord Valian Lightfinger, Lord Fradd, and Lord Vanilla Gold.  All three are playing as rogues.  So despite their recent enoblement at the end of session #24, the party decided they wanted to go on a "heist" against a noble villa that Valian Lightfinger scoped out during downtime a few weeks ago. However, first, the party went to meet with the Zhentarim.  Specifically Valian was looking for the information he hired to Zhentarim to obtain for him--a report on the whereabouts of the Black Viper (or Diane Roznar).  Because they didn't check in to give him the report this week.  The Zhentarim seemed sort of preocupied when Valian showed up to ask for information on the two footpads he had hired to track down Lady Roznar.  But Valian's Zhent contacts did inform him that his two Zhentarim footpads had gone missing about a week prior, and havent been seen since. So Valian pa
1 comment
Read more 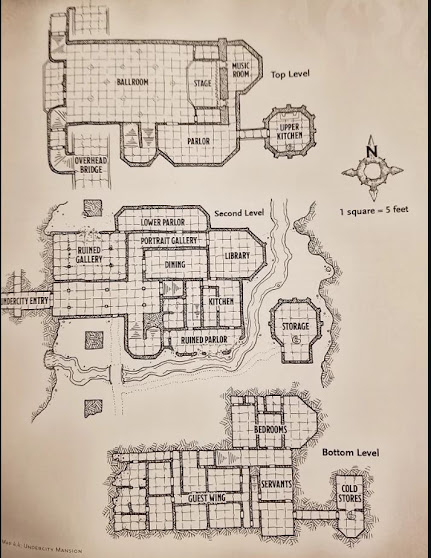 I regret that I didn't keep better session notes in the earlier half of the campaign.  This campaign is currently on its 23st session.  And my notes for the first 13 sessions are extremely scanty--or non-existent.  However, I went back through old messages on my D&D discord server to figure out when this particular session occurred. It was the 5th session of the campaign: Hammer 18, 1493 DR (January 18, 2021).  After a TPK in the very first session, the players had three more successful sessions under their belt.  The cast of characters was still fairly limited.  Of the "original 4" post-TPK PCs, only two still see regular play.  Valian Lightfingers, and Fradd--both rogues.   Joining Valian and Fradd for in session #5 were Gywdion the Bard--who has since left Waterdeep to seek his fortune elsewhere in the world--and Forwyn Brightflame, a high elvish eldritch knight. The "plot-hook" the players decided to follow this session arose out of downtime.  During one
Post a Comment
Read more

Creating the Barony of Zundbridge 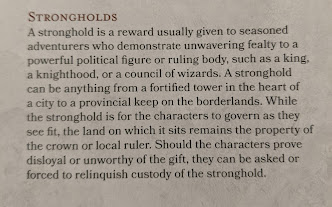 As I explained in my last session report , after killing the Baron of Blood (a Vampire Lord who had made Waterdeep his hunting grounds for ~700 years), the Open Lord of Waterdeep ennobled all of the PCs involved in this feat--and furthermore granted a Barony to Sir Aeoth the Paladin (Aeoth's player keeps giving him increasingly elaborate epithets in his username on Discord--but I can't keep track of Aeoth's latest self-appellation). I think killing a 700 year old vampire merited a significant reward for the players--and by the time the Baron of Blood finally was dusted--Aeoth was the only man who still had a positive HP total.  Giving a player a barony is neat!  A fun way to reward the player for his investment in the character. And the last time I ennobled a PC--my brother seized the Kingdom of Chult by strength of arms (with help from the other PCs)--when I ran Tomb of Annihilation for my IRL campaign last year, I gave the group a single "epilogue" session to pl
Post a Comment
Read more 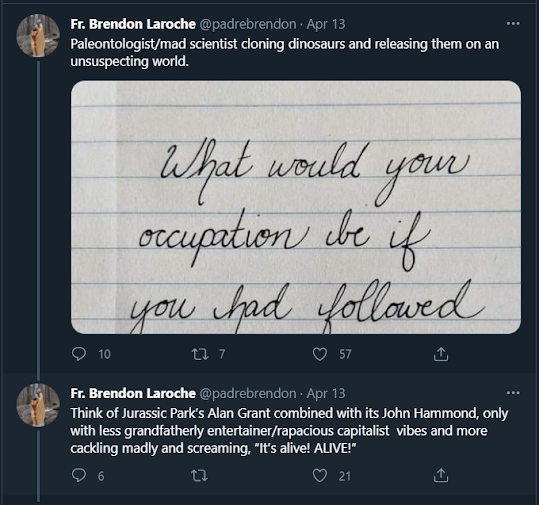 "Game time is of the utmost importance . . . .  YOU CANNOT HAVE A MEANINGFUL CAMPAIGN IF STRICT TIME RECORDS ARE NOT KEPT. . . .  It is best to use 1 actual day = 1 game day when no play is happening." - Gary Gygax, Dungeon Masters Guide, p. 37 ________________________ Due to Memorial Day, there was no session this week--which is not to say that nothing interesting or significant happened this week in my campaign world.  In fact, three rather major events occurred. First, Aeoth--who began his career as a lowly 1/8 CR guard henchman--was given the Barony of Zundbridge.  Upon arriving in Zundbridge, Baron Aeoth discovered that his new town was suffering from a deadly plague--and spent roughly 3.5 weeks of downtime trying to save as many people in his new town from dying of the sewer plague.  (Aeoth is not available for play or downtime until June 22). Second, a group of extremely powerful undead attacked and overpowered the City Watch garrison at the River Gate in the Trade War
Post a Comment
Read more

May 25, 2021
Present for this session were Aeoth, Valian, Vanilla Gold, and Fradd. As has become the norm (I think this is a feature of the real-time/downtime D&D campaign), this session began with the players trying to decide what to do. In a recent session, the players made a wager with Dawn Age Pervert (a "patron"--my term for NPCs who's downtime is being managed by someone other than me).  The terms of this wager were fairly simple.  If the PCs kill a mindflayer before DAP, the PCs get ownership of Skullport.  If DAP kills the mindflayer before the PCs, DAP gets possession of Barrelriders (the player owned tavern/ home-base).  The problem is that this mindflayer has eluded both the PCs and DAP, and is hiding somewhere on the Astral Plane.  I think the players briefly considered following up on this lead, but they had another hook closer to Waterdeep they also wanted to pursue first--finding and killing the Baron of Blood.  Last week they delved a bit into the Baron of Blood
Post a Comment
Read more

May 18, 2021
Tonight's session featured the "A-Team," Aeoth the Paladin, Valian the Rogue, and Fradd the Rogue--who just returned to Waterdeep (in-game time) after a very successful planar excursion in Sigil, and the Outlands.  The session began with just Aeoth and Valian--Fradd's player joined a bit later in the session. Before leaving Waterdeep in last week's session to go meet with Lord Neverember, Forwyn left a note asking the A-Team to go and hunt down the mind-flayer for DAP.  The players decided to follow up on this lead.  In the past session, the B-Team had hired a private investigator to track down the Mind Flayer's current location--and he told them the Mind Flayer had holed up in Skullport.  However, the A-Team didn't know much about Skullport or how to get there, aside from some general information which the B-team received from the private investigator they hired last week. Rather than just charging blindly in, the players decided to first touch base with
Post a Comment
Read more 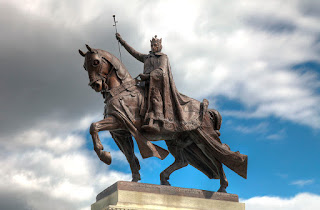 The main team (Aeoth, Valian and Fradd) were still in time dilation from last week's excursion into the outer planes. One of the regular players (Fradd) didn't want to roll-up a backup, and told me that he would be taking a break until his main character was available to play again.  Another regular player (Valian) was delayed eating out with co-workers  So this week, we started off the session with just two PCs--Aeoth's backup (Forwyn, elvish fighter), and a new player.  The new player, who plays the Barbarian Broll in BDubs' campaign, was playing Vanilla Gold, a human rogue. Like most sessions in the campaign, we started off in Barrelriders--a tavern owned by some of the PCs.  I let Vanilla Gold introduce his character very briefly.  And then a knight burst into the tavern. A few weeks ago, I determined there was a chance Lord Neverember (who originally hid the 500,000 gp treasure--and used the Stone of Golor as his "treasure map") would reach out to the pla
Post a Comment
Read more
More posts